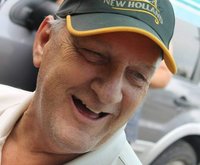 Mole, Roger James on Tuesday, July 13, 2021, at the age of 74, passed away peacefully with his good friends Jim and Millie Copp at his side.  Roger is a beloved Father, Grandfather, Brother and Friend who is survived by his daughter Deborah Greavette (Robert Simpson), his son Matthew Kennedy (Mylene Victo), his grandchildren Katie, Koelina, Ryan, McKenna, Elizabeth and Justine and his two great-granddaughters Gracie and Blakely.  Roger is also survived by his many beloved siblings, nieces and nephews.

Roger spent most of his adult life giving his all to one company and that was PPG.  He loved his job, he loved the plant and loved the people who worked there with him.  Roger was always grateful for the opportunities he had while working there .... especially going to China to help set up a glass plant.

He is fondly remembered by all who knew him for his guitar playing and singing.  He is also remembered for his undying loyalty to his Montreal Canadiens.

What he was known most for was his love for classic cars.  He bought and restored a few in his life, but his first love was his 1955 Mercury MontClair Sun Valley which he named SweetDreams.  Even if you didn't know Roger, you knew SweetDreams.  He would say that SweetDreams was a part of him and indeed became one of his personnas 'the owner of SweetDreams'.

He was/is greatly loved by many and will be greatly missed, but we know he will be happy farming the land with his Granddaddy in his next great adventure.

The family would like to express their sincere appreciation to all his caregivers for looking after him in his final days.

Private family arrangements entrusted to the DOWNS AND SON FUNERAL HOME, Hepworth. Expressions of remebrance to Wiarton Hospital c/o Bruce Peninsula Hospitals Foundation would be appreciated. Messages of condolence may be sent to the family through www.downsandsonfuneralhome.com